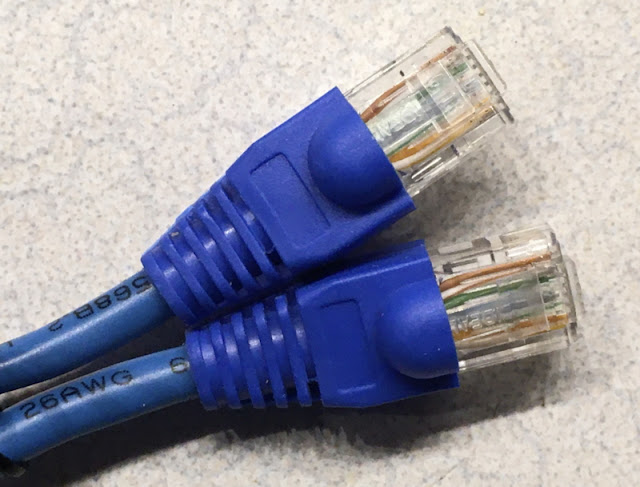 So you've got an Ethernet cable without (maybe with) an anti-snag protector over the locking tab and it finally broke off. This has happened to countless Ethernet cables. The RJ in RJ45 stands for Registered Jack  (and RJ11 or RJ14  modular PSTN telephone plugs). It came about from an FCC mandate to standardize modular telephone jacks and their pinouts for wiring PSTN phone lines (good 'ol POTS line connections). Technically, an RJ11 may have six positions, but it only has two active wires - the center two. It's for single line PSTN phones. If someone has a two line phone and connection using four wires, it's technically an RJ14, which looks the same except it has four wires. The two middle ones are for line #1 and the pair on each side of them is for line #2. There's also the rarely used RJ25 which six wires for three lines, and yup, you guessed it, line #3 is the outermost pair.

I've digressed, but it gives some insight into the 8-wire RJ45 Ethernet cable plug and its origin. Whoever created the RJ design concept and its fragile locking tab should be soundly thrashed, publicly flogged, then tarred and feathered before being run out of town on a rail. I've seen countless telephone and Ethernet cables with broken tabs that cannot lock into the jack, just like this one. The arrow points to where the tab used to be. As is typical, it readily pulls out of an Ethernet jack and even if it doesn't pull out completely, the connection is very unreliable: 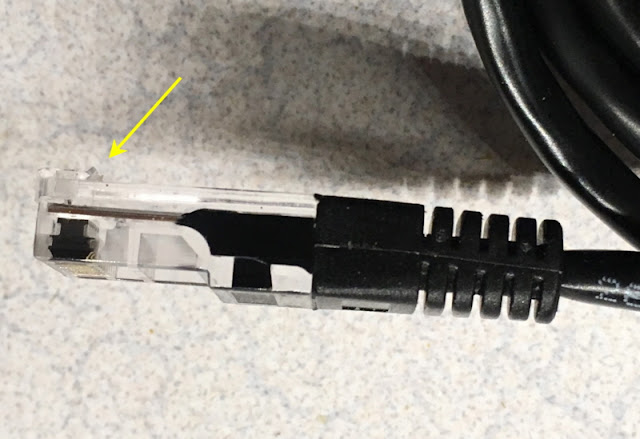 That is the question. Most people pitch them, and then go to Best Buy, Staples, Office Max, or Target, depending on who is closest, and buy another as the broken one has created a connectivity crisis. Alas, these brick and mortar retail stores usually charge a king's ransom for decent Ethernet cables. They're much cheaper on Amazon, but then you have to wait a couple business days and pay shipping if you don't have Amazon Prime. Look first along the side of the cable. They're all marked with the internal wire gauge (AWG), how many volts can be pushed down the thin wires for PoE (Power over Ethernet) to power devices without using a wall wart (common for VoIP phones and remote cameras). Along with all that is the Category marking. Most encountered today will have Cat.5e marked on them, but there are many Cat.5 (no "e") still floating around, and the Cat. 6 are increasing in numbers. Cat.7 are currently rare (and expensive). The higher the category number, the greater the bandwidth (bits per second) you can push through the cable. If it's a Cat.5 (no "e"), pitch it and replace it with a Cat.6. The Cat.5 is obsolete. It was made for 10BaseT and 100BaseT Ethernet. It's only rated for 100 Megabit data throughput. If you find a Cat.4 cable, send it to the Smithsonian or some other museum with an ancient computer exhibit. Those with Cable provider Internet have a faster connection than a Cat.5 cable can deliver. Cat.5e was made for 1000BaseTX Gigabit bandwidth, ten times that. Cat.6 is the future and it's rated for 10 Gigabit with Cat.6a emerging now to handle a modest increase of that. If it's a Cat.5e cable under 25 feet that's otherwise in good condition, and used to connect a client device to a switch or router, you can keep it. Very few devices, including personal computers, demand more than 1 Gigabit throughput. VoIP phones require very little bandwidth. On the other hand, a shared media server on the home LAN should have Cat 6 to the router if multiple family members are accessing it simultaneously. It needs the bandwidth to handle multiple simultaneous demands for streaming content. Likewise, connections between routers and switches should be Cat. 6, as should the connection from the cable (or DSL) modem and the first router (the one with the WAN port, internal firewall, etc). The photo shows the markings on a five foot Cat.5e I just repaired. 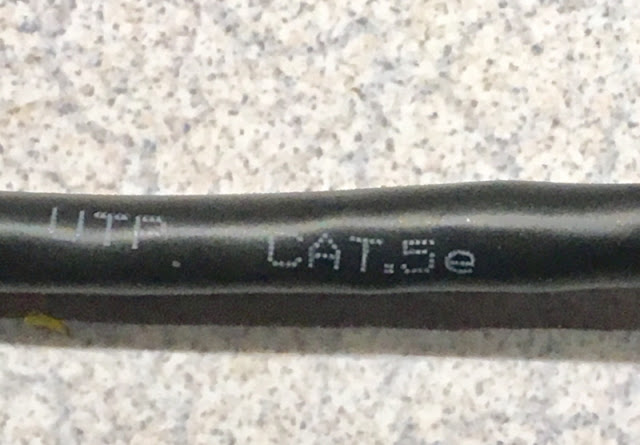 Almost pitched this one when I saw the wire gauge. It's 26 AWG which is mighty thin wire. Cat.5e for any appreciable distance should be at least 24 AWG, a thicker wire. The smaller the number, the larger the wire diameter. Historically, the wire gauge is the number of times it is "drawn" (pulled) in fabrication. The more times it's drawn, the thinner it becomes. Since the cable is only 5 feet long and isn't carrying any power for a device (PoE) of some kind (e.g. a camera or smart doorbell, etc.) it doesn't matter. I'll fix this one. If it were 25 feet or longer, or being used to carrying PoE to a device, I'd pitch it and replace it with a 24 or 23 AWG cable. For long distribution runs between switches and WiFi access points, 23 AWG works better with lower loss. For patch cables to go from a switch or router to another nearby switch or client device (e.g. computer, phone, TiVo, TV, etc.) 24 AWG is just fine. This is what typical wire gauge markings look like: 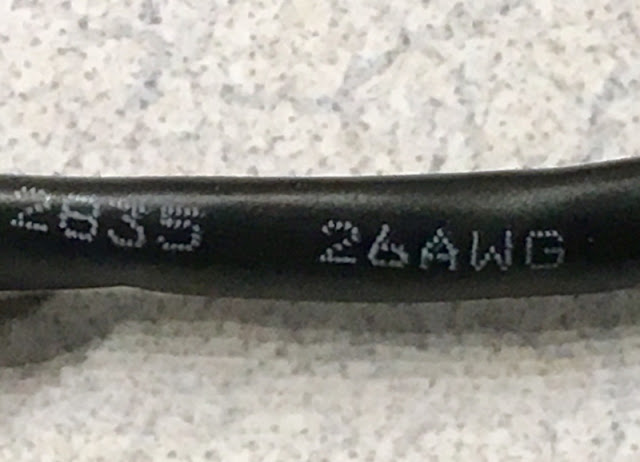 Required and Optional Tools and Materials 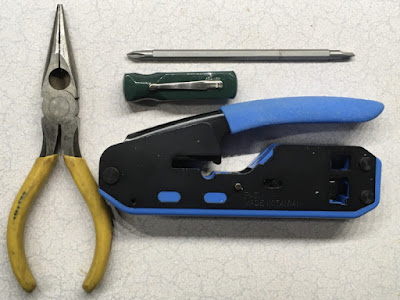 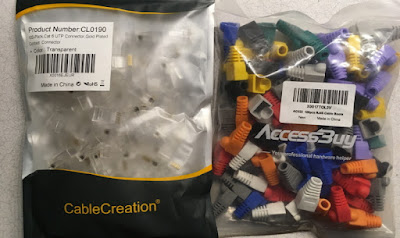 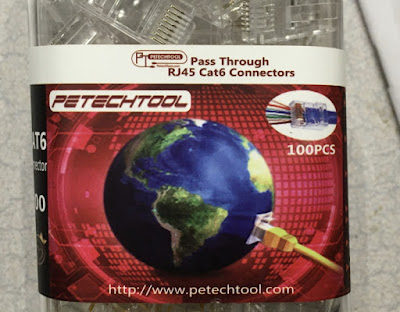 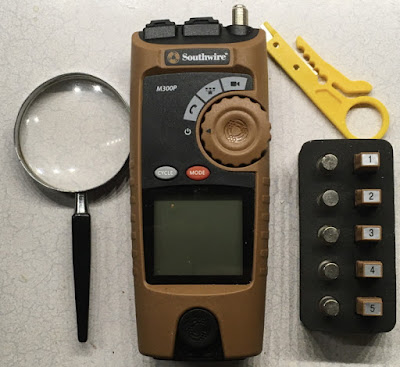 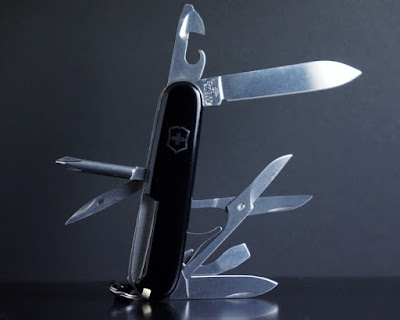 Untwisting the Pairs and Arranging Wires in Proper Sequence

Go forth, be fruitful, and fix those Ethernet cables with broken locking tabs that are worth salvaging. Eventually, you may decide to give up buying finished cables and fabricate your own Ethernet patch cables cut to the length you need instead of having to live with one that's the next size longer than you need (or want), requiring you to loop it up and hide the loops somewhere. I just bought 1000 feet of 24 AWG copper stranded wire Cat.6a cable (made for patch cords), for about $133 on Amazon ($0.133 per foot), with free shipping to my doorstep (all 30+ pounds of it). Should last me for the rest of my lifetime. A 10 foot Cat.6a cable costs me about $1.50 in materials, and a 25 foot is roughly $3.75 which are very difficult prices to match for 550MHz Cat.6a rated cables.

One final tip . . .
Electrical cords should never be folded up flat and squished. It's very hard on the wires, and causes more resistance with the electrons having to go around hairpin turns (no joke, this is real). It's hardest on cables like these that have very fine wires in them, and it's a leading cause of cable failure other than the plugs. Excess cable should be coiled. I use thin strips of Velcro to hold the small coil. Likewise, stored cables should always be coiled up, without twisting them. I hate it when I unpack a new electronic device and see the thin power cable from the wall wart to the device folded up and smashed flat. Very bad practice, but seemingly commonplace. I always untie them and loop them into an untwisted coil, attempting to get rid of as much folded up memory as possible.

Dedicated to the Practice of Polymathy Polymathy: The possession of learning in many fields. Your host is John Lind. Here you wi...